Today in Iceland there are around three thousand reindeers. You will only find wild reindeers in Iceland in the East of Iceland. They are the largest land mammals in Iceland

When we think about reindeers we instantly think about Christmas and Santa Claus. Since the story about St. Nicholas Santa Claus was released in 1823 it has become the symbol for Christmas in today's world. In Iceland, the reindeer do not fly between houses with Santa Claus bringing children gifts. Nonetheless, in Iceland, you will find large herds of wild reindeers travelling across the Eastern part of Iceland.

In Iceland, the average weight of adult purebred cows is about 40 kg, but the bull weighs about 90 kg on average. Both breeds are just over a meter at shoulder height, but the head and angle of the tail are larger than cows. The fur has two layers, making it very isolated. During the wintertime, the snow does not melt when it sits on the reindeer due to the warmth from the reindeer being so isolated by the fur. Reindeer live a herd life and keep one bull around a herd of cows that he alone mates with. During the breeding season, which has its peak in October, the neck of the bull thickens and a long beard grows around the neck. This way, they gain more strength and protection in the fight for the cows, as the strongest bull dominates a herd of females and the fathers of their calves. In Iceland, the reindeer do not have problems with parasitic and biting insects.

Where to see reindeer in Iceland?

Are reindeer native to Iceland?

Reindeer are not native to Iceland. Originally they were brought to Iceland from Norway to raise a reindeer farm in Iceland. The first time the reindeer was brought to Iceland was around 1780. During the first years, it turned out to be a struggle as many of the reindeer did not survive the travel from Norway. It was not until around 1940 when the population of wild reindeer began to grow in Iceland reaching 3.000 reindeer. In the first years the reindeer stayed in the North of Iceland by Mývatn but today they are only found in the East of Iceland. 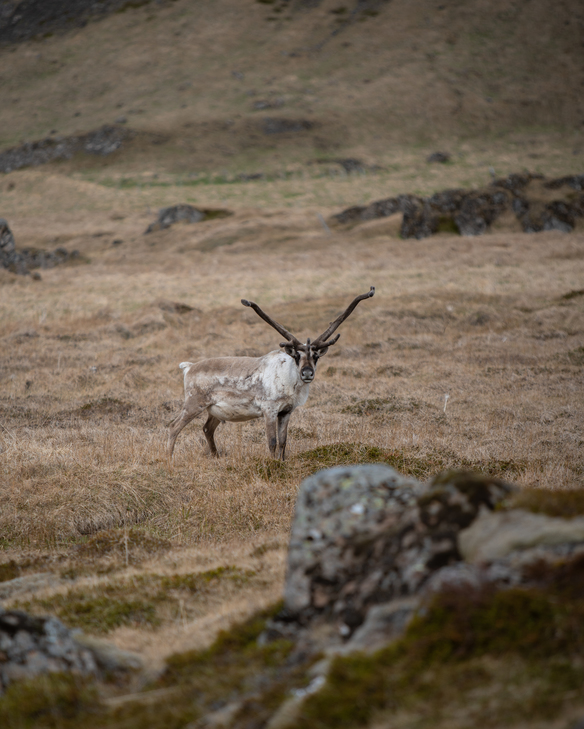 Reindeers are protected in their natural environment along with other wild mammals in Iceland. The protection for reindeers in Iceland is stricter than for other wild mammals. Originally reindeer were brought to Iceland for agriculture, but they have been wild in Iceland and hunting reindeers has been done for almost the whole time the reindeer has been in Iceland. Hunting reindeers in Iceland are subject to restrictions on area, number, sex, and age of animals. The Environment Agency allocates hunting permits, but this must be applied annually. The hunting period for reindeer in Iceland is between July 15th and September 15th every year.

Want to get to know about Icelandic animals? Here you can read about the Icelandic horse.