Here in Iceland we don’t have one Santa Claus, instead we have 13 Yule Lads or like we call them in Icelandic - Jólasveinar

Their name reflects their special talent, looks or appetite. They only come out in December and sneak a little present in the children’s shoes in the window of their bedroom. But they only give presents to the well-behaved children and a potato for those who do not behave well. They live in the mountains with their mother, Grýla, their father, Leppalúði and the Christmas Cat. Grýla is very ugly and mean. In the old days she took the children who did not behave well, put them in her bag and traveled with them to the mountains and cooked them in here pot. Leppalúði is a very lazy man and does not seem to do much at all. In the old days the Christmas Cat ate the children who did not get new clothes for Christmas.

Children put their shoe in the window, hoping for a little present, on the night of the 12th of December, when the first Yule Lad comes the next morning, and the last one arrives on the morning of Christmas Eve. 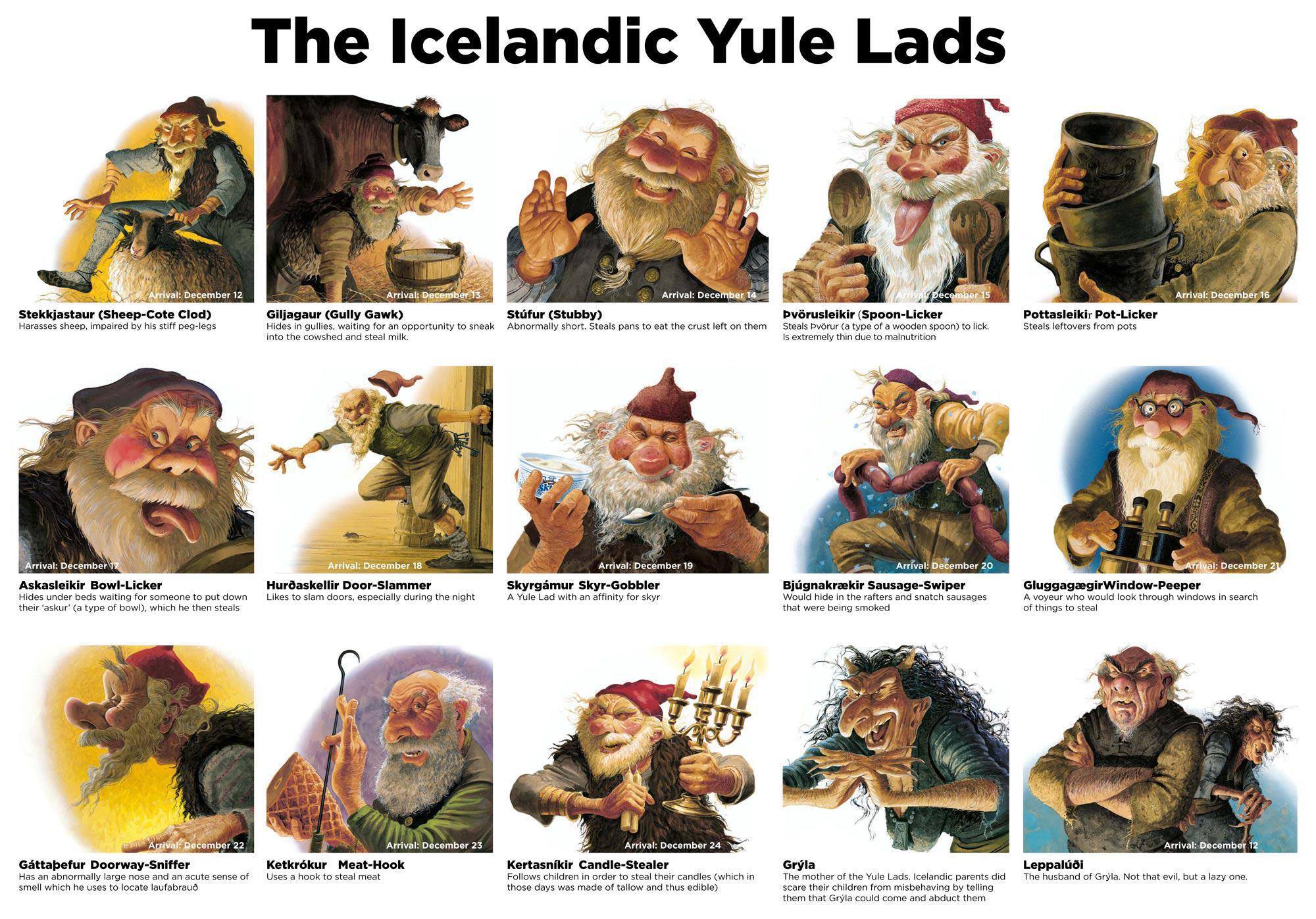 The first Yule Lad, Stekkjastaur (Sheep-Cote-Clod) is really stiff and has a wooden leg.

The second Yule Lad, Giljagaur (Gully Gawk) loves milk and in the old days he used to sneak into barns and steal milk for cows.

Stúfur (Stubby) is the third Yule Lad. He is really small, quick and likes to steal pans. He likes to scrape off food that stuck to pans.

The fourth Yule Lad, Þvörusleikir (Spoon-Licker) is were thin and stirring spoons are his favourite.

Pottaskefill (Pot-Scraper) is the fifth Yule Lad. He likes to scrape food and specially porridge from the bottom of the pots.

The sixth Yule Lad, Askasleikir (Bowl-Licker) likes to lick bowls that were left for dogs and cats to lick.

The seventh Yule Lad is Hurðaskellir (Door-Slammer). His favourite thing to do is listen to door squeak and of course slam them, knowing that people are sleeping.

Skyrgámur (Skyr-Gobbler) is the eighth Yule Lad. He likes to eat Skyr until he is so full that he can’t move anymore.

The ninth Yule Lad, Bjúgnakrækir (Sausage-Swiper) steals sausages from people and eats them.

Gluggagægir (Window-Peeper) is the tenth Yule Lad. He peeks through windows to see all the beautiful things people have in their homes.

Gáttaþefur (Doorway-Sniffer) is the eleventh Yule Lad. He has a huge and sensitive noice. He runs towards a good smell.

The twelfth Yule Lad is Ketkrókur (Meat-Hooker). He really likes meat and takes them of any sort.

The thirteenth and the last Yule Lad is Kertasníkir (Candle-Begger). He is known to be the children’s favourite Yule Lad because he is usually the most generous. He likes candles and often steals them from people. But because he is in favourite to most children, they often leave a candle in their shoe for him to take.