Bird watchers and scientists from all over the world come to Iceland to see the puffin for them selves as Iceland is undoubtedly the puffin watching capital of the world. The Puffin is thanks to the incredibly cute and funny appearance one of the favorite summer activities for visitors in Iceland.

There are between 8 to 10 million puffins inhabititing Iceland which is around 60% of the world´s entire Atlantic puffin population. There are in fact more puffins in Iceland then there are people!  If you take a stroll in downtown Reykjavik you might think the puffin or „Lundinn“ like the locals call it was the national animal of Iceland because the puffin is the superstar of all local gift shops ! However the true national animal of Iceland is the Gyrfalcon. 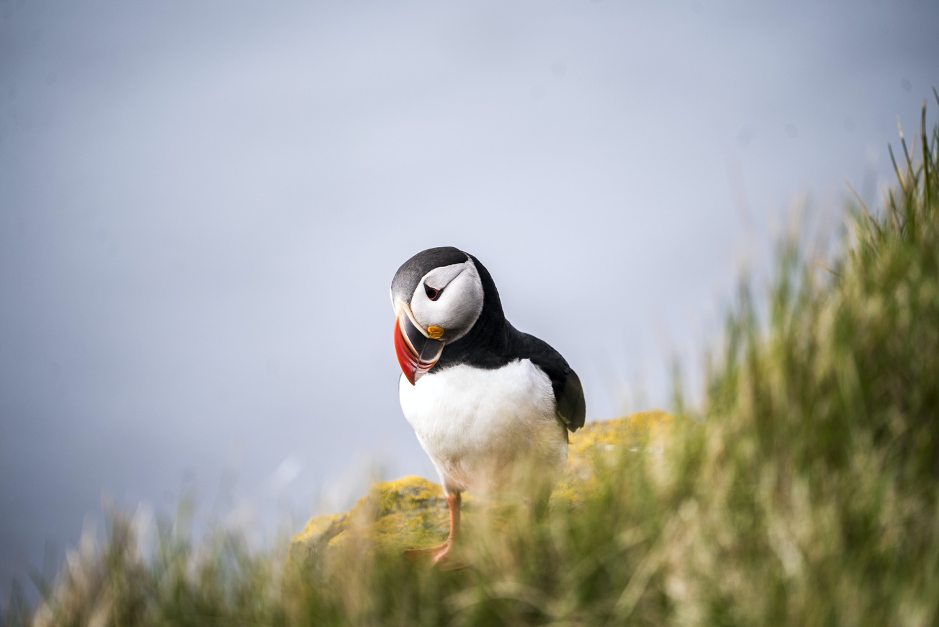 The puffins can not be seen all year round as they roost on the surface of the ocean and only go on land in order to breed, lay their eggs and raise their chicks. If you want to see the puffins then the best time to visit Iceland is in the summer between May and August. You do not have to travel far from the capital to see them as there is a large puffin colony on a small island just a few minute boat ride from Reykjavik !

But if you want to see the puffins up close there are a few places along the coast where you can rent a car to drive to and approach them. There are also boat tours that you can find all around the country.

When the puffin is nesting it is very easy to approach them despite having been haunted and their eggs been raided in Iceland for a millenium, they are not afraid of people and often it is easy to get as close as a metre of them. Despite that, this needs to be done with respect to the animal

Here are some guidelines to make sure the experience is as pelasant for you as it is botherless to the bird:

The ouffins are „Threatened“ according to the International union for the Coservation of Nature (IUCN) as their population are in decline across their range, in Iceland as well and that is why we need to be careful and protective of the Puffin.

Also, if you disturb one puffin it may unsettle the whole colony. Puffins are very sociable animals when on land, and they look to each other to determine their safety. So if one takes off in a panic, all the others may follow.

The Puffin is a sea-bird and are excellent swimmers, they can dive up to 60 metres and use the waves for resting. They use their wings to stroke underwater and when flying their wings are very fast, and can reach up to 400 times per minute and can reach a flight speed of 80 km an hour ! Their favorite food is the herring and sand eels.

We are using cookies to provide statistics that help us give you the best experience of our site. You can find out more or switch them off if you prefer. However, by continuing to use the site without changing settings, you are agreeing to our use of cookies. Read more »